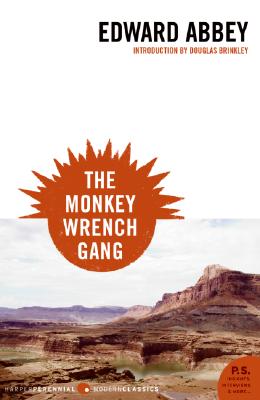 “A thing of beauty. . . . A wildly funny, infinitely wise, near to tragic tale of man against the bog god machine.” —Houston Chronicle

Ex-Green Beret George Hayduke has returned from war to find his beloved southwestern desert threatened by industrial development. Joining with Bronx exile and feminist saboteur Bonnie Abzug, wilderness guide and outcast Mormon Seldom Seen Smith, and libertarian billboard torcher Doc Sarvis, Hayduke is ready to fight the power—taking on the strip miners, clear-cutters, and the highway, dam, and bridge builders who are threatening the natural habitat. The Monkey Wrench Gang is on the move—and peaceful coexistence be damned!

Edward Abbey spent most of his life in the American Southwest. He was the author of numerous works of fiction and nonfiction, including the celebrated Desert Solitaire, which decried the waste of America’s wilderness, and the novel The Monkey Wrench Gang, the title of which is still in use today to describe groups that purposefully sabotage projects and entities that degrade the environment. Abbey was also one of the country’s foremost defenders of the natural environment. He died in 1989.