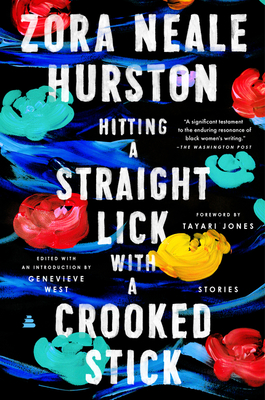 Hitting a Straight Lick with a Crooked Stick: Stories from the Harlem Renaissance

From “one of the greatest writers of our time” (Toni Morrison)—the author of Barracoon and Their Eyes Were Watching God—a collection of remarkable stories, including eight “lost” Harlem Renaissance tales now available to a wide audience for the first time.

In 1925, Barnard student Zora Neale Hurston—the sole black student at the college—was living in New York, “desperately striving for a toe-hold on the world.” During this period, she began writing short works that captured the zeitgeist of African American life and transformed her into one of the central figures of the Harlem Renaissance. Nearly a century later, this singular talent is recognized as one of the most influential and revered American artists of the modern period.

Hitting a Straight Lick with a Crooked Stick is an outstanding collection of stories about love and migration, gender and class, racism and sexism that proudly reflect African American folk culture. Brought together for the first time in one volume, they include eight of Hurston’s “lost” Harlem stories, which were found in forgotten periodicals and archives. These stories challenge conceptions of Hurston as an author of rural fiction and include gems that flash with her biting, satiric humor, as well as more serious tales reflective of the cultural currents of Hurston’s world. All are timeless classics that enrich our understanding and appreciation of this exceptional writer’s voice and her contributions to America’s literary traditions.

Zora Neale Hurston was a novelist, folklorist, and anthropologist. She wrote four novels (Jonah’s Gourd Vine, 1934; Their Eyes Were Watching God, 1937; Moses, Man of the Mountain, 1939; and Seraph on the Suwanee, 1948); two books of folklore (Mules and Men, 1935, and Tell My Horse, 1938); an autobiography (Dust Tracks on a Road, 1942); an international bestselling nonfiction work (Barracoon: The Story of the Last “Black Cargo,” 2018); and over fifty short stories, essays, and plays. She attended Howard University, Barnard College, and Columbia University and was a graduate of Barnard College in 1928. She was born on January 7, 1891, in Notasulga, Alabama, and grew up in Eatonville, Florida.

Praise for Hitting a Straight Lick with a Crooked Stick: Stories from the Harlem Renaissance

“Hitting a Straight Lick with a Crooked Stick helps illuminate Hurston’s path to iconic status…Add [Hurston’s] matchless powers of observation, exemplary fidelity to idiomatic speech and irresistible engagement with folklore, and the outcome is a collection of value to more than Hurston completists. Any addition to her awe-inspiring oeuvre should be met with open arms.” — New York Times Book Review

“Fans and scholars of Hurston’s work and the uninitiated alike will find many delights in these complex, thoughtful and wickedly funny portraits of black lives and communities… [Hitting a Straight Lick with a Crooked Stick] is a significant testament to the enduring resonance of black women’s writing.” — Washington Post

“With biting wit, Hurston gets to the heart of the human condition. . . her rediscovered stories will electrify.” — Booklist, starred review

“An illuminating and delightful study of a canonical writer finding her rhythm.” — Publishers Weekly

“These narratives comprise a rich tapestry of Hurston’s matchless vision and talent.” — BookPage

“A reminder of why literature is so important. . .These short stories capture the essence of the African American life at the time, and offer a glimpse into how she became one of the more influential writers of the Harlem Renaissance.” — Cultured Vultures

“Read, and you’ll almost wish you were slumped on a wooden chair on Jim’s porch on a hot summer day. Read, because authenticity oozes from every page here and you can’t help but like the men and women in the tales. Read, as author Zora Neale Hurston’s wit shines between biting narrations and comments. . .”  — Miami Times

"Decades on, this new collection is a powerful reminder of her lasting resonance." — Time magazine