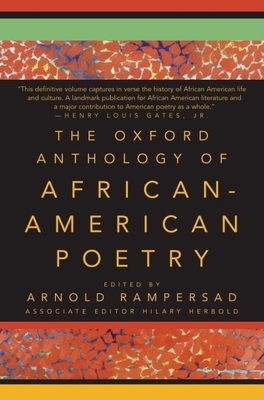 For over two centuries, black poets have created verse that captures the sorrows, joys, and triumphs of the African-American experience. Reflecting their variety of visions and styles, The Oxford Anthology of African-American Poetry aims to offer nothing less than a definitive literary portrait of a people.
Here are poems by writers as different as Paul Laurence Dunbar and W.E.B. Du Bois; Countee Cullen and Langston Hughes; Gwendolyn Brooks and Amiri Baraka; Rita Dove and Harryette Mullen; Yusef Komunyakaa and Nathaniel Mackey. Acclaimed as a biographer and editor, Arnold Rampersad groups these poems as meditations on key issues in black culture, including the idea of Africa; the South; slavery; protest and resistance; the black man, woman, and child; sexuality and love; music and religion; spirituality; death and transcendence.
With their often starkly contrasting visions and styles, these poets illuminate some of the more controversial and intimate aspects of the black American experience. Poetry here is not only or mainly a vehicle of protest but also an exploration of the complex and tender subtleties of black culture. One section offers tributes to celebrated leaders such as Sojourner Truth and Malcolm X, but many more reflect the heroism compelled by everyday black life. The variety of poetic forms and language captures the brilliant essence of English as mastered by black Americans dedicated to the art of poetry.
Loving and yet also honest and unsparing, The Oxford Anthology of African-American Poetry is for readers who treasure both poetry and the genius of black America.

Arnold Rampersad is Sara Hart Kimball Professor in the Humanities and Associate Dean for the Humanities at Stanford University. His many books include the two-volume Life of Langston Hughes; Days of Grace: A Memoir (co-authored with Arthur Ashe); and the definitive Collected Poems of Langston Hughes. Associate Editor, Hilary Herbold, a graduate of the University of California at Irvine, also earned a doctorate in English and American Literature in 1997 from Princeton University. After teaching for several years in the Department of English, Dr. Herbold is now Associate Dean of Undergraduate Students at Princeton.