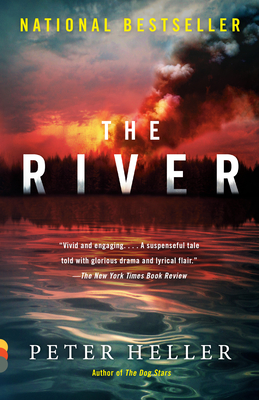 The River: A novel (Vintage Contemporaries)

Peter Heller can take you on a journey through nature like no other writer. The River is the story of two close friends wanting nothing more than to enjoy their time together on a trip through the Canadian wilderness, and fly fishing has never been so beautifully portrayed nor has the serenity of water and nature. But the peacefulness slowly wanes and the tension begins to build as the trip becomes a race against encroaching forest fires and an attempt to save the life of the mysterious woman they have picked up along the way. Heller has created a story of friendship and survival that should not be missed.

NATIONAL BESTSELLER • From the best-selling author of The Dog Stars comes the story of two college students on a wilderness canoe trip—a gripping tale of a friendship tested by fire, white water, and violence.

"A fiery tour de force … I could not put this book down. It truly was terrifying and unutterably beautiful."—The Denver Post

Wynn and Jack have been best friends since college orientation, bonded by their shared love of mountains, books, and fishing. Wynn is a gentle giant, a Vermont kid never happier than when his feet are in the water. Jack is more rugged, raised on a ranch in Colorado where sleeping under the stars and cooking on a fire came as naturally to him as breathing. When they decide to canoe the Maskwa River in northern Canada, they anticipate long days of leisurely paddling and picking blueberries, and nights of stargazing and reading paperback Westerns. But a wildfire making its way across the forest adds unexpected urgency to the journey.

One night, with the fire advancing, they hear a man and woman arguing on the fog-shrouded riverbank; the next day, a man appears on the river, paddling alone. Is this the same man they heard? And if he is, where is the woman? From this charged beginning, master storyteller Peter Heller unspools a headlong, heart-pounding story of desperate wilderness survival.

PETER HELLER is the national bestselling author of Celine, The Painter, and The Dog Stars. The Painter was a finalist for the Los Angeles Times Book Prize and won the prestigious Reading the West Book Award, shared in the past by Western writers such as Cormac McCarthy and Terry Tempest Williams, and The Dog Stars, which was published to critical acclaim and lauded as a breakout bestseller, has been published in twenty-two languages to date. Heller is also the author of four nonfiction books, including Kook: What Surfing Taught Me About Love, Life, and Catching the Perfect Wave, which was awarded the National Outdoor Book Award for Literature. He holds an MFA from the Iowa Writers' Workshop in poetry and fiction and lives in Denver, Colorado.

Praise for The River: A novel (Vintage Contemporaries)

“[Heller] has created indelible characters. . . . The River is a beauty-of-nature/cruelty-of-humanity hybrid, but this time he leans into the thriller aspect of the tale, with gripping results.”
—Minneapolis Star Tribune

"The prose is glorious, Heller’s evocation of the natural surroundings stunning, the tension razor-sharp."
—The Observer (London)

“Stunning, beautiful, life-affirming, and heartbreaking. . . . Heller writes with deep respect and empathy for not only nature and its inhabitants but also of human frailty, friendship, loyalty, and love. [An] exquisite book.”
—Criminal Element

“As much an allegory about man’s impact on the Earth as it is an adventure story. . . . Heller’s melodious renderings are drawn from a lifetime of not just witnessing nature, but of actively paying attention to how it is woven together.”
—5280 Magazine

“Peter Heller has struck gold again with The River. . . . Masterly paced and artfully told, The River is a page-turner.”
—BookPage (starred review)

“Fresh and affecting. . . . [Heller’s] pacing is masterful. . . . An exhilarating tale delivered with the pace of a thriller and the wisdom of a grizzled nature guide.”
—Kirkus Reviews (starred review)