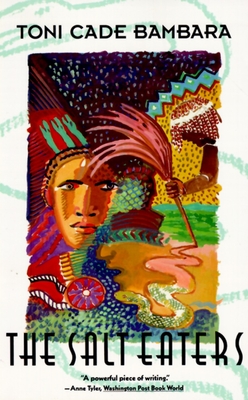 A community of Black faith healers witness an event that will change their lives forever in this "hard-nosed, wise, funny" novel (Los Angeles Times).

Set in a fictional city in the American South, the novel also "inhabits the nonlinear, sacred space and sacred time of traditional African religion” (The New York Times Book Review).

Though they all united in their search for the healing properties of salt, some of them are centered, some are off-balance; some are frightened, and some are daring. From the men who live off welfare women to the mud mothers who carry their children in their hides, the novel brilliantly explores the narcissistic aspect of despair and the tremendous responsibility that comes with physical, spiritual, and mental well-being.

Toni Cade Bambara is the author of two short story collections, Gorilla My Love and Seabirds Are Still Alive, and a novel, The Salt Eaters. She has also edited The Black Woman and Tales and Short Stories for Black Folks. Her works have appeared in various periodicals and have been translated into several languages. She died in 1995.

“A powerful piece of writing.” —Anne Tyler, The Washington Post

“With the force and freedom of a great traditional storyteller . . . Toni Cade Bambara takes a lot of chances. Her novel is set in the black section of a large Southern city . . . but her characters also inhabits the nonlinear, sacred space and sacred time of traditional African religion.” —John Edgar Wideman, The New York Times Book Review

“A book full of marvels.” —The New Yorker