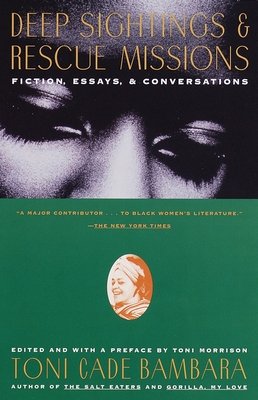 Edited and with a Preface by Toni Morrison, this posthumous collection of short stories, essays, and interviews offers lasting evidence of Bambara's passion, lyricism, and tough critical intelligence. Included are tales of mothers and daughters, rebels and seeresses, community activists and aging gangbangers, as well as essays on film and literature, politics and race, and on the difficulties and necessities of forging an identity as an artist, activist, and black woman. It is a treasure trove not only for those familiar with Bambara's work, but for a new generation of readers who will recognize her contribution to contemporary American letters.

On December 9, 1995, Toni Cade Bambara died of cancer at the age of 56. In its obituary of her, The New York Times called Bambara, "a major contributor to the emerging genre of black women's literature."

"Bambara's passion and concern for her people permeates Deep Sightings and Rescue Missions.... So strongly does the book convey Bambara's fiercely loving spirit that even those just making her acquaintance will feel the pain of her loss."
--Miami Herald