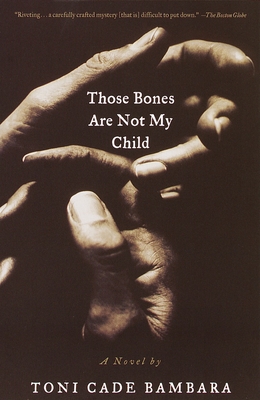 Those Bones Are Not My Child: A Novel (Vintage Contemporaries)

This suspenseful novel portrays a community--and a family--under siege, during the shocking string of murders of black children in Atlanta in the early 1980s.

Written over a span of twelve years, and edited by Toni Morrison, who calls Those Bones Are Not My Child the author's magnum opus, Toni Cade Bambara's last novel leaves us with an enduring and revelatory chronicle of an American nightmare.

Having elected its first black mayor in 1980, Atlanta projected an image of political progressiveness and prosperity. But between September 1979 and June 1981, more than forty black children were kidnapped, sexually assaulted, and brutally murdered throughout "The City Too Busy to Hate." Zala Spencer, a mother of three, is barely surviving on the margins of a flourishing economy when she awakens on July 20, 1980 to find her teenage son Sonny missing. As hours turn into days, Zala realizes that Sonny is among the many cases of missing children just beginning to attract national attention. Growing increasingly disillusioned with the authorities, who respond to Sonny's disappearance with cold indifference, Zala and her estranged husband embark on a desperate search. Through the eyes of a family seized by anguish and terror, we watch a city roiling with political, racial, and class tensions.

Toni Cade Bambara is the author of two short-story collections, Gorilla My Love and Seabirds Are Still Alive, and a novel, The Salt Eaters. She has also edited The Black Woman and Tales and Short Stories for Black Folks. Her works have appeared in various periodicals and have been translated into several languages. She died in 1995.

Praise for Those Bones Are Not My Child: A Novel (Vintage Contemporaries)

"Riveting. . .a carefully crafted mystery [that is] difficult to put down." -The Boston Globe

"Magnificent. . . . A powerful culmination of Bambara's career." -- The Denver Post

"Luminous and rich in sensory images . . . haunting and surprising. . . . [Bambara] has managed to combine a complex murder mystery, a sophisticated commentary on race relations, and a wonderful tapestry of dozens of memorable characters." --USA Today

"Truly worthy of being called an epic. . . . Anyone who ever thought it does
not take a special kind of courage to write a great novel should read Those Bones Are Not My Child." --Chicago Tribune