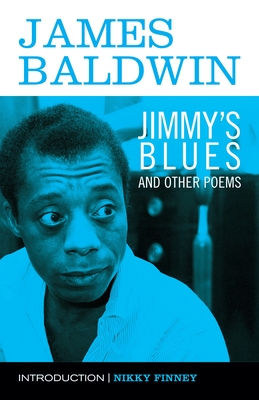 Jimmy's Blues and Other Poems

All of the published poetry of James Baldwin, including six significant poems previously only available in a limited edition

During his lifetime (1924–1987), James Baldwin authored seven novels, as well as several plays and essay collections, which were published to wide-spread praise. These books, among them Notes of a Native Son, The Fire Next Time, Giovanni’s Room, and Go Tell It on the Mountain, brought him well-deserved acclaim as a public intellectual and admiration as a writer. However, Baldwin’s earliest writing was in poetic form, and Baldwin considered himself a poet throughout his lifetime. Nonetheless, his single book of poetry, Jimmy’s Blues, never achieved the popularity of his novels and nonfiction, and is the one and only book to fall out of print.

This new collection presents James Baldwin the poet, including all nineteen poems from Jimmy’s Blues, as well as all the poems from a limited-edition volume called Gypsy, of which only 325 copies were ever printed and which was in production at the time of his death. Known for his relentless honesty and startlingly prophetic insights on issues of race, gender, class, and poverty, Baldwin is just as enlightening and bold in his poetry as in his famous novels and essays. The poems range from the extended dramatic narratives of “Staggerlee wonders” and “Gypsy” to the lyrical beauty of “Some days,” which has been set to music and interpreted by such acclaimed artists as Audra McDonald. Nikky Finney’s introductory essay reveals the importance, relevance, and rich rewards of these little-known works. Baldwin’s many devotees will find much to celebrate in these pages.

James Baldwin (1924–1987) was a novelist, essayist, playwright, poet, and social critic, and one of America’s foremost writers. His writing explores palpable yet unspoken intricacies of racial, sexual, and class distinctions in Western societies, most notably in mid-twentieth-century America. A Harlem, New York, native, he primarily made his home in the south of France. He is the author of several novels and books of nonfiction, including Notes of a Native Son, Go Tell It on the Mountain, Giovanni’s Room, Another Country, Tell Me How Long the Train’s Been Gone, If Beale Street Could Talk, Just Above My Head, The Fire Next Time, No Name in the Street, and The Evidence of Things Not Seen, and of the poetry collection Jimmy’s Blues.

Praise for Jimmy's Blues and Other Poems

“...Poetry was the current that powered his novels, essays, and plays…blazing, embracing collection...as potent and significant now as then. ...Baldwin writes perceptively and poignantly... His humor is lashing and sly, his sexiness bold and lithe. Baldwin is thunderous and crooning, rueful and cutting, prayerful and ferocious, questioning and questing.”
—Booklist

“These poems were written over thirty years ago, yet they still speak to many of the injustices in the world and to our experience as human beings trying to make sense of our own existence.”
—The Good Men Project

“Lyrical, captivating, evocative, thought-provoking poems that also happen to be exploring the political climate of his time.” —Ploughshares

“I am completely indebted to Jimmy Baldwin’s prose. It liberated me as a writer. These poems overwhelm without competing with his prose and I am grateful to have this collection.”
—Toni Morrison

“These poems are morning stars to be inhaled everyday as we strip search our eyes for new memory. Thank you Brother Jimmy for the breath of your poems.”
—Sonia Sanchez

“James Baldwin was born for truth. It called upon him to tell it on the mountains, to preach it in Harlem, to sing it on the Left Bank in Paris. His honesty and courage would lead him to see truth and to write truth in poetry, drama, fiction and essay. He was a giant.”
—Maya Angelou