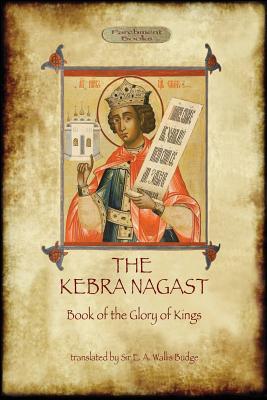 The Kebra Negast (the Book of the Glory of Kings), with 15 original illustrations (Aziloth Books)

The 'Kebra Nagast' (Glory of Kings) was written at least one thousand years ago, and takes its theme from much older sources, some going back to the first century AD. Written originally in the African classical language Ge'ez, the book tells the history of a Davidic line of African monarchs, descended from King Solomon of Israel and Maqeda, Queen of Sheba (Saba), who journeyed to the Levant specifically to visit the wise and far-famed monarch. It was a successful meeting of minds, and Maqeda proved the equal of Solomon the Wise in a series of long philosophical discussions. But the Hebrew monarch was not merely attracted to the African Queen's intellect - by means of a ploy, he seduced Maqeda, who gave birth to a son, Ebna-Lahakim. But this seduction proved to be Solomon's undoing. While in Israel, Prince Ebna-Lahakim gathered around him a group of royal nobles and together they seized the two most powerful symbols of Israel's compact with the Almighty - the Ark of the Covenant and the stone tablets of the Ten Commandments. These trophies were carried back to Abyssinia where, it is said, they remain to this day.