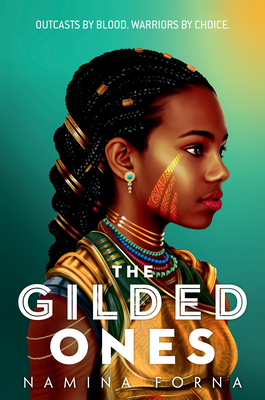 An interesting, immersive fantasy where women are treated as second-class citizens and killed if they are deemed to be impure. This all changes when Deka, deemed impure, survives death and joins the alaki, where she is trained to be an elite warrior in an army of women. With wonderful world-building and adventure, this book is perfect for fans of Children of Blood and Bone.

Sixteen-year-old Deka lives in fear and anticipation of the blood ceremony that will determine whether she will become a member of her village. Already different from everyone else because of her unnatural intuition, Deka prays for red blood so she can finally feel like she belongs.

But on the day of the ceremony, her blood runs gold, the color of impurity–and Deka knows she will face a consequence worse than death.

Then a mysterious woman comes to her with a choice: stay in the village and submit to her fate, or leave to fight for the emperor in an army of girls just like her. They are called alaki–near-immortals with rare gifts. And they are the only ones who can stop the empire's greatest threat.

Knowing the dangers that lie ahead yet yearning for acceptance, Deka decides to leave the only life she's ever known. But as she journeys to the capital to train for the biggest battle of her life, she will discover that the great walled city holds many surprises. Nothing and no one are quite what they seem to be–not even Deka herself.

The start of a bold and immersive fantasy series for fans of Children of Blood and Bone and Black Panther.

Namina Forna is the New York Times bestselling author of The Gilded Ones series. She has a MFA in film and TV production from USC School of Cinematic Arts and a BA from Spelman College. Namina now works as a screenwriter in LA and loves telling stories with fierce female leads. Visit her on twitter at @NaminaForna and on Instagram at @namina.forna.

Praise for The Gilded Ones

“Namina Forna could be the Toni Morrison of YA fantasy.” —Refinery 29

“Fans of Children of Blood and Bone, Mulan, and the Dora Milaje from Black Panther are going to adore this one.” —BuzzFeed

“The girls are powerful, the danger is real, and the characters are engaging and diverse. Forna has accomplished something really special here, equal parts subversive and fun.” —Tor

"A dark feminist tale spun with blood and gold, The Gilded Ones lifts the veil of violent patriarchy and burns the idea of purity to the ground. Must read!" —Dhonielle Clayton, New York Times Bestselling author of The Belles

“Haunting, brutal, and oh-so-relevant. This book will suck you into a world where girls bleed gold, magic fills the air, and the real monsters hide behind words instead of claws.” —Roseanne A. Brown, New York Times bestselling author of A Song of Wraiths and Ruin

“An enthralling debut. The Gilded Ones redefines sisterhood and is sure to leave readers both inspired and ultimately hopeful." —Stephanie Garber, #1 New York Times bestselling author of Caraval

“The Gilded Ones is a fierce, unflinching fantasy that marks Forna as a debut to watch.” —Kiersten White, New York Times bestselling author of And I Darken

"Phenomenal and extraordinary! Forna's breathtaking use of language depicts a thrilling journey through an epic world, rife with danger and deception, as an obedient girl survives the patriarchy and becomes a warrior. Unquestionably, the best fantasy of 2021." —Kim Johnson, author of This is My America

“An epic new fantasy with heart-stopping stakes and a fierce, persevering hero, The Gilded Ones is a dazzling and powerful debut.” —Elizabeth Lim, bestselling author of Spin the Dawn

“A poignant examination of patriarchal oppression that ensnares its reader and doesn’t let go. With a compelling main character and fresh magic system, it takes you on a journey of self-discovery through a fantastically built world with a burning mystery at its heart.” —Kalyn Josephson, author of The Storm Crow

“While elements of action and social justice are strong, there is also mystery . . . readers will find themselves awestruck with satisfying revelation, leaving both a clean ending and desire for more.”
—Booklist, starred review

“Female-led YA fantasy is an overcrowded genre, but Namina Forna brings a fresh perspective in her stormingly good debut . . . Action combines with an intense feminist story of sisterhood, where strength is found in female friendships and alliances.” —The Guardian

“All of the alaki girls have realistic and moving trauma as a result of actions wreaked on them both as human women and alaki, and strong female friendships stand at the forefront of this novel that will have readers thinking about it long after the last page.” —The Bulletin